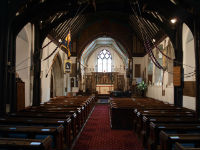 St Augustine, who in 7th century, brought Christianity to the south eastern corner of England. He became the first Archbishoterbury. With him were Justus and Paulinus, and it was Justus who founded the diocese of Rochester and became the first Bishop of Rochester in 604 AD. Paulinus was sent north. Paulinus returned from Northumbria in 633AD and became the third Bishop of Rochester, continuing his missionary work in Kent. It is thought he probably sailed down the River Medway from Rochester, past the Saxon Cathedral Church, up into the River Thames and on into the River Cray, which was then a navigable waterway for small vessels. He continued up the River Cray, where the dedications of the Churches of St Paulinus, Crayford and St Paulinus, St Paul’s Cray (now closed) commemorate the route of his journey. St Paulinus also brought the message of Christianity to the settlements surrounded by woods along the River Cray, including a hamlet known as Fot’s Cray, named after Godwin Fot, a local chieftain.

At the time of St Paulinus’ visit, a wooden Saxon Church was probably erected on the site of the present Church of All Saints: the original size of Foots Cray Church exactly matched the dimensions of a Saxon Church. The present Church, perpendicular in style, dates from about 1330. The Lord of the Manor at that time was Sir Simon de Vaughan, who was buried with his wife about 1350 in an altar tomb. The remains of their effigy, originally under the arch which divides the Lady Chapel from the nave of the Church, are now under a low Tudor brick arch in the Chapel. The font is Norman, dating from the late 12th century.  The Church was extensively altered in 1861. Old box pews with doors were removed, as were two galleries in the Church. The nave was extended westwards with the bell tower at the west end of the Church left standing on four oak posts, so that the bells are now rung from the centre of the aisle. The west door case and porch, dating from about 1500, and the door to the Church, dating from the time of Oliver Cromwell were reset at the end of the longer nave.

In 1872 the Church was lengthened eastwards into the chancel and the reredos was added. The present organ was presented by Sir John Pender, the founder of Cable and Wireless, who is buried in the Churchyard, where there is an imposing memorial to him. A remaining panel from the rood screen which would originally have separated the chancel from the nave has been incorporated into the front of the prayer desk and a part of the rood loft stair remains in the small turret which now leads to the pulpit through a depressed Tudor arch. The arch has a Jacobean gate dated 1638 and was probably a gate from the original communion rails put to a different use. The alabaster pulpit was erected in 1886 and was presented by the Harenc family of Foots Cray Place.  The majority of the stained glass windows are Victorian, although the one in the west wall of the Lady Chapel is much older and the two windows on the south side of the nave at the east end are 14th century work.  Altar pieces of the Ten Commandments and the Lord’s Prayer with pictures of Moses and Aaron, painted in 1709, are now on the walls of the nave. The Church spire, re-shingled in 2004, was built by Lord Waring to commemorate the coronation of King Edward VII. The carved choir stalls and chancel screen also date from this time.  In the Churchyard is an iron grave slab commemorating ‘Martin Manning, Yeoman’ dating from 1656. Also to be noted is the mass dial on the south side of the outside of the wall

Carol singing in the Community Christmas 2015 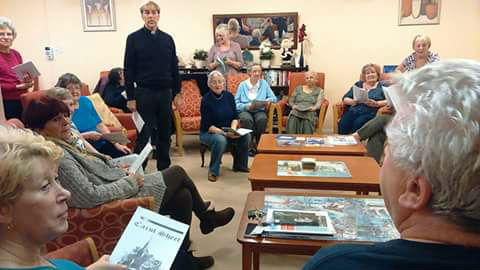 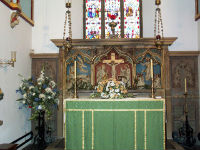 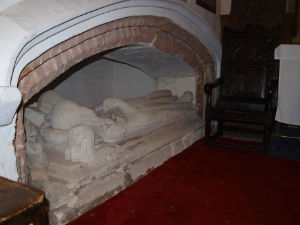 Our oldest headstone  now in the Lady Chapel for safekeeping 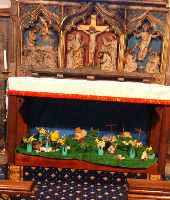 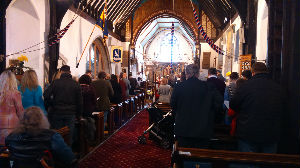 OUR BELLS   by Gary Blinch

At All Saints’ Church we have five bells in our beautiful wooden tower. This hasn’t always been the case, however, and at the beginning of the 19th Century there were just two. But the number gradually increased to five by 1889. The current bells date from 1987 when the old ones were recast by the Whitechapel Bell Foundry and rehung by members of the Kent Association of Change Ringers

They are quite unusual for two reasons. Firstly, they are rung from the aisle of the Church which only happens in three other churches in Kent – something which is not altogether convenient! Secondly, they are especially light and range in weight from about 12 stones upwards to about 28 stones. The six bells at St John’s in Sidcup are, for instance, more typical in that they go from about 28 stones up to about 70 stones. Ours are, in fact, the second lightest ring of five bells in Britain.

You may be surprised to learn that church bells are usually rung upside down which, I think, must be to do with projecting the sound out rather than down into the Church. Before we can begin ringing, therefore, we first have to ‘ring the bells up’ from their resting position facing downwards. After that, ringing then consists of alternately pulling the ‘hand-stroke’ using the ‘sally’ (i.e. the fluffy bit in the middle of the rope) and the ‘back-stroke’ using the tail end. If you are interested in seeing what this looks like in practice, there is a small working model in the Church.

When we start, the ringer with the treble – the lightest bell – will both check that the others are ready and begin the process of ringing by calling ‘look to…treble’s going…she’s gone.’ Then, after some time spent ringing the bells in peal, the person who is ‘leading’ will decide to vary it a bit. So you will hear one of us say something like ‘4 follows 2; 3 follows 1.’ This is our cue to change order on the next hand-stroke, which is not as easy as it sounds! This is why bell ringing is often called change ringing – as in the Kent Association of Change Ringers mentioned above. (The practice of change ringing appears to be a largely British tradition, although we have exported it overseas. For advanced ringers, there are many complicated patterns which can be followed).

In order to stop, the leader will call ‘stand’ and we all then have to come to a halt by resting the bell as gently as possible against the ‘stay’ on the next hand-stroke – something which we don’t always manage to do first time.

For our bells to continue ringing, however, we need volunteers who have been trained up to do it. At present, we have just two qualified ringers who are still able to ring – Ros and Jan. I am part-qualified. So, in order to ring on a Sunday, we have to borrow ringers from other churches and Jim and John, who are Greenwich ringers, have agreed to lend a hand.

I feel that I must end this article, therefore, by making an appeal for more people to come forward. If you, or anyone you know, have ever thought of giving it a try, please let us know.